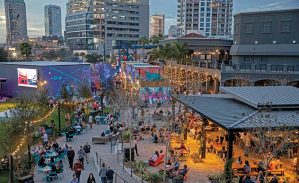 For decades, downtown Tampa was a dead city after 5 p.m. Once the offices closed, the streets were empty. Tampa was once ranked as the seventh most dangerous region for pedestrians. The young talent we were able to attract to the area would soon leave for cities such as Austin, Nashville, and Charlotte. So what was so fundamentally wrong with Tampa that we couldn’t create a more dynamic living environment?

Was it having the right people in place to affect change? Or, was it really just about timing?

In recent years, the momentum has definitely shifted. Through various leadership teams, Tampa has started to dig itself out. A roadmap of sorts was created to develop around one of our best features—the water. The City started to focus its early efforts on waterfront areas, green spaces, and the neighboring areas surrounding downtown.

Tampa was always fragmented. It was hard to see a clear vision of what it wanted to be in the future. It had great bones, but so many quality areas and assets were never developed. Tampa’s biggest leap toward addressing this was finishing the 2.6-mile Riverwalk trail along the Hillsborough River. It had been discussed for years, but never fully completed until recently. Through this development, Tampa finally got the boost it needed to be able to move its other projects forward. With the Riverwalk complete, the possibilities are now endless.

The focus has continued along the waterfront. Downtown has become more livable with modern residential, office, and retail options. Developers have increased walkability and created a community that people enjoy being in and around after work.

With all of this development and growth, nobody can argue that appropriate transportation is still an issue. As discussed in our last newsletter, the Tampa Streetcar will be able to support the City’s needs. Right now, the Streetcar is attracting riders out to see the sights, but soon it will be a necessity for commuters who wish to move in and around downtown Tampa and Ybor for lunch, dinner, and business meetings. Check out the full story in our last issue for more information on the Streetcar’s timeline.

Our City is changing, that’s for sure. It’s an exciting time for us. Before the recent developments, there had not been a Class A office tower built in years. Reports estimate that more than 50,000 people are moving here each year. Amgen, Johnson & Johnson, and Bristol-Myers Squibb have taken up residency. In the past year, the Tampa-St. Petersburg-Clearwater metro area has created 27,500 new private-sector jobs, the third-highest number of jobs among all Florida metro areas. The Bay area’s 3.1 percent unemployment rate is lower than what it was a year ago. It has been reported that the Bay area had more than 60,000 job openings in May; over 19,000 of them were high-wage STEM job openings.

The market is growing which is a great thing for our City. As Tampa continues to become the urban darling for companies looking to move, office space will become even more competitive, making it necessary to be strategic when looking for new space. The Dikman Company has extensive experience with Tampa’s commercial real estate market. If a move is in your future, we are here to support your business needs.