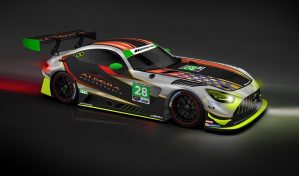 This will be my 11th year as a spotter for a pro-am team at the Rolex 24 at Daytona. Spotting at the Rolex starts with the Roar, the practice before the race, now the weekend before the race. A spotter is the guy who generally is at the tallest point on the racetrack, such as the roof at Daytona, the top of the grandstands at Watkins Glen, or perhaps on a boom lift at Sebring International Raceway at 60 feet.

Most races are two to three hours and yes, they are intense. But nothing compares to an endurance race—whether it’s six hours like Watkins Glen, 10 hours like Atlanta, or 12 hours like Sebring. The big one, Rolex 24, is a 24-hour punishing race that typically is run in January’s rainy, cold weather in Florida.

If you have ever watched a NASCAR race, they highlight the spotters on the roof at Daytona because it’s the most scenic of any racetrack in America. For the spotter who is perched on the roof of the new Daytona International Speedway, the view is all the way to the beaches of Daytona and well beyond. Many of today’s racecars have onboard cameras and LiDAR (light detection and ranging) to show where other cars are but drivers don’t always have the time to look at the screen. They may be attending to other issues, making drivers very dependent on their spotters to keep them safe and for critical information on who’s coming up on them, particularly at night.

Is a spotter really needed?
Spotters relay critical information on when they must pit, if there is an issue ahead, lining up for position during a restart, when the green flag drops, and so much more. A spotter and the driver are joined at the hip and there is a great degree of trust between the driver and his spotter.

The spotter has a tremendous amount of responsibility for the welfare of his driver. Each driver has different needs and wants and, in a pro-am race, the spotter learns to know the likes and dislikes of each driver.

The spotter talks as needed, sometimes seemingly non-stop, but ONLY as needed. For me, it’s one of the most intense, focused activities I have ever participated in and that says a lot as a former pilot, skydiver, national Taekwon-Do champion, and racecar driver. The difference is, I’m responsible for someone else and I MUST stay alert and focused at all times for the benefit of that driver.

Getting through the long shift
After years of trying different time stints, my co-spotter and I have come up with what we feel gives us the most relief between stints—a six-hour shift. It sounds like a long time and sometimes it feels like it, but if the race is running smooth and rhythmically, it goes by fast. Toilet breaks co-inside with yellow flags or pit stops but sometimes it can be a long time between them. With the large amount of coffee and red bull consumed, sometimes the job gets painful.

The spotter NEVER loses site of his driver— well, almost never. Daytona is a 3.56-mile track and the spotter is able to help his driver around the entire track with the help of binoculars. If you have never tried being on binoculars for six hours watching a car navigating a high-speed 3.56 mile track—well, it’s interesting and exhausting.

It takes a team to win the race
Besides talking to the driver, the spotter is in constant communication with the crew chief, crew, team owner, and race control. The spotter needs to know where all the lead cars in that team’s race class are at any moment—especially toward the end of the race. Winning a race starts with a good starting position and the spotter helps the driver secure a position toward the front—preferably the first position. Did I say that this job has no pressure?

Things can get dicey at night
Amateur drivers can get sleepy and nervous late at night and the spotter acts as a calming effect, coach, psychiatrist, and “pal.” Amateurs are typically the slowest of the drivers and at night and in the rain at Daytona, it can be frightening when 15 high-speed prototypes are coming up behind the driver in the pitch black with their bright lights glaring in the driver’s rearview mirror and having no idea how many are coming or where they are going. It’s the spotter’s job to orchestrate the passing of these prototypes and to help the driver successfully stay clear of them; otherwise the driver could get “punted” at 180 mph.

The IMSA 2021 season and its start at the Roar/Rolex 24 looks to be an exciting one that hopefully can successfully navigate the COVID-19 obstacles.

So, at 69.5 years old, can I still perform at the highest levels in the sport? We will see.

Merry Christmas, and I hope you have a wonderful New Year!