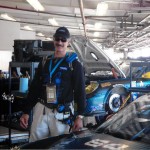 Tampa, FL (February) – Bob Dikman, Chairman and CEO of The Dikman Company  was selected again by The Racers Group (TRG) to serve as an official race spotter at the Rolex 24 at Daytona, a 24-hour sports car endurance race which was held January 29th at Daytona International Speedway in Daytona Beach, FL.

The 24 Hours of Daytona is run on a 3.56-mile (5.73 km) combined
road course, utilizing portions of the NASCAR tri-oval and an infield road course. Since its inception, it has been held the last weekend of January or first weekend of
February, part of Speedweeks, and it is the first major automobile race of the year
in the United States.

Bob Dikman ALC, CCIM, SIOR, CRB has been very active in racing for over 30 years and is very involved with the Porsche Club (PCA) and also holds instructor
certificates from PCA, Chin Motorsports and NARRA. Bob was also the Sponsorship/Vendor Chair for the 48 Hours at Sebring.

“The Dikman Company was proud to support this event by being a spotter,” stated
Dikman. “It was an honor to be a part of this legendary race as it celebrated
its 50th anniversary this year.”

The Dikman Company is a Commercial/Industrial Real Estate Services firm that has
been providing clients throughout Florida with a full range of commercial real
estate services since 1983.  Commercial real estate services include:
sales, leasing, property management, tenant representation, investment
counseling and asset analysis.