An Adventure to Remember

On October 3, my wife and I left our summer home in Bend, Oregon to drive our motor coach to Denver for an SIOR (Society of Industrial and Office Realtors) International Conference. On the way we stopped in Salt Lake City, Utah for a meeting with an associate. With more than 120,000 seat miles in a couple of different motorhomes under my belt, I’m comfortable operating the equipment and have a working knowledge of routine maintenance to be performed.

SIOR has two annual international conferences that bring more than 1,000 members together for a three- or four-day educational and networking event that is the very best in the commercial real estate arena. The value proposition that SIOR offers benefits both our clients and customers. I attend both conferences as well as the State and Southeastern meetings.

Having determined that traveling back to Florida via Interstate 10 through the Panhandle would most likely be filled with delays due to the cleanup after Hurricane Michael, I decided to head to Interstate 20. It seemed to me to be the most sensible route. I would head south outside of Montgomery, Alabama where Interstate 20 starts to head north. 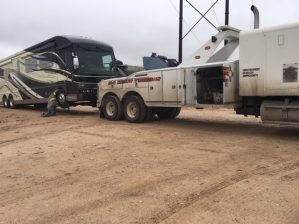 A Stop Engine Light is Never a Good Sign

Just 32 miles west of Hobbs, New Mexico, my Cummins ISX 15-liter engine displayed a “Check Engine” light followed by the dreaded “Stop Engine” light which would have been followed by Cummins’ famous “limp” mode; a five-mile-per-hour crawl that turns you into a rolling roadblock. Pulling off onto the shoulder of Highway 180/62, we waited four and a half hours for a Cummins Mobile Service tech to arrive. We later found out that this highway is referred to as Death Valley since the oil service workers are famous for excessive speeds and crashes that result in death. Cummins’ mobile technician, fearing for his life on the side of the highway, was unable to make roadside repairs, so we ended up getting it towed—quite an experience.

We arrived late in Hobbs, New Mexico and headed to Cummins for repairs. I called to alert them that we were on our way when I was informed that they could not even look at it for two weeks. Cummins tech support told me that two other truck dealers in Hobbs were authorized Cummins repair facilities. The service manager at MHC Kenworth told me to come right over and they would take care of me. An expected one-day repair turned into a blown engine necessitating an engine replacement. More than two weeks later, we were on our way to Tampa. A little background on Hobbs, New Mexico below: 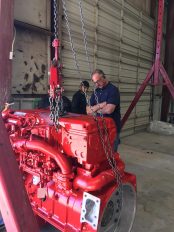 The New Engine Waiting to be Installed

Hobbs, NM
• Population 40,000
• Oil discovered in 1927
• Hobbs is in the Permian Basin
• Delaware Basin is in the Permian Basin
• New Mexico is the third largest oil-producing state in the country
• Last year oil and gas producers invested more than $13 billion in the region
• The U.S. Energy Information Administration predicts that the Permian Basin could soon be one of the largest oil producers in the world
• New Mexico produced 147 million barrels of oil in 2015 plus natural gas and potash
• The Permian Basin runs from southeastern New Mexico including the cities of Carlsbad (Carlsbad Caverns) and Hobbs to northwestern Texas including Lubbock, Pecos, Midland, and Odessa.

The service manager suggested we might want to stay in Lubbock, Texas, home to Texas Tech, so we did. The economy in the Permian Basin is BOOMING! Service rates are $207 an hour in Hobbs and they have more work than they can handle. Fast food restaurants are paying $16-18 an hour and they can’t find workers. Halliburton leases half of the hotel rooms in Hobbs for $9,000 per month or a room for $300 a night. The aquifers that supply drinking water in Lubbock and Hobbs have been tainted with all the fracking and oil wells. All water fountains are turned off. Most hotels provide bottled water for their guests free of charge.

The MHC Kenworth folks couldn’t have been nicer and eager to help us get on our way. Heading home, we ended up driving through Dothan, Alabama to pick up Interstate 10, 50 miles west of Panama City and 50 miles east of Tallahassee. It took us two hours to travel the 50 miles to Tallahassee. Interstate 10 narrows to one lane in either direction several times to clean up all the pine trees that have been topped and the oak trees that have been downed. It’s a sad thing to see. It’s good to be home.

Reminder: The Dikman Company Has a New Address

The Dikman Company has moved its offices in order to accommodate the growing medical practice of our tenant Dr. Radley Griffin, Griffin Concierge Medical.

Our new location is next door at 1313 South Howard Avenue, Tampa, Florida 33606.
We are excited about our tenant’s growth and the growth of The Dikman Company’s offices. 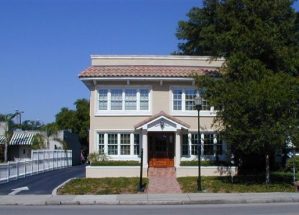